Just a few shots from the latest developments. 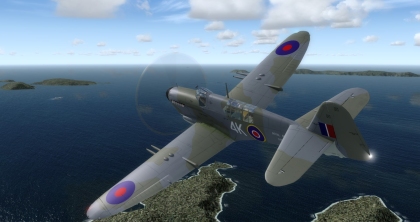 The first two are an NF1 of 812 NAS ‘Black Flight’ which was the Night Fighter detachment on HMS OCEAN in the late 40s.  You can also make out the latter style rocket launchers which I hurriedly made after I realised they were more appropriate for the post-war aircraft!

The next three shots are inside and outside of an F1 of 1772 NAS while in European waters in 1944.  I’m still trying to confirm if this aircraft would have been involved in the Tirpitz raids or if it would have been an earlier Z registration model with the lower pilot’s canopy.

Only a couple of things left to tick off before I start on the manual and installers now.